A downloadable game for Windows

Batch Town is a game coded entirely in batch.

I am currently working on the game, so please report bugs and if you have suggestions, I'd be more than happy to hear them!

If you're on windows, just extract the zipped folder and run the Batch Town.bat file!

Make sure to keep everything in the same folder, saves are created in the same place as the game!

I have not made MAC or Linux versions yet, and I'm not sure if I ever will.

One thing I strongly recommend is to try and optimize the scroll screen that comes after assigning jobs. This screen only gets longer as the population grows.

I've been playing with the batch code and found the admin area. Built it into the town menu, lol.

I don't know why, but you had "errorlevel" without it being in %%. The value of errorlevel counted from the highest to lowest number as well. Like 9 to 1.

%ERRORLEVEL% is a default system variable.

Batch was something I learned the basics on in my IT class and I thought it would be a cool idea to create a game using it.

I don't know all the tricks, I just wanted to share something I thought was cool.

I do plan on trying to optimize the screen after assigning jobs once the population becomes overbearing, but I think the scrolling text is, in a way, kinda mesmerizing.

By the way,how did you make the console beep when a key that has nothing to do with the game gets pressed

Batch automatically beeps when it receives an unexpected input.

I did that just so I would have testing tools and to reward adventurous players :) 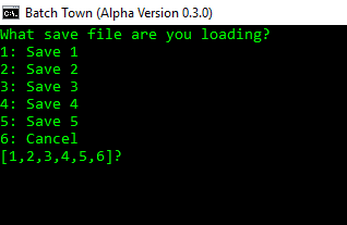 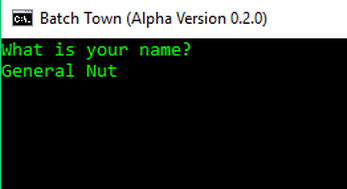 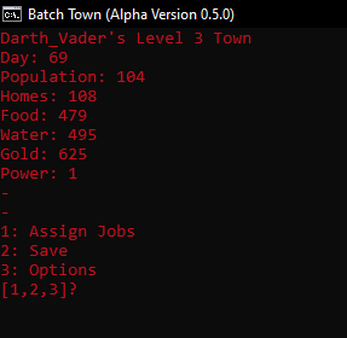